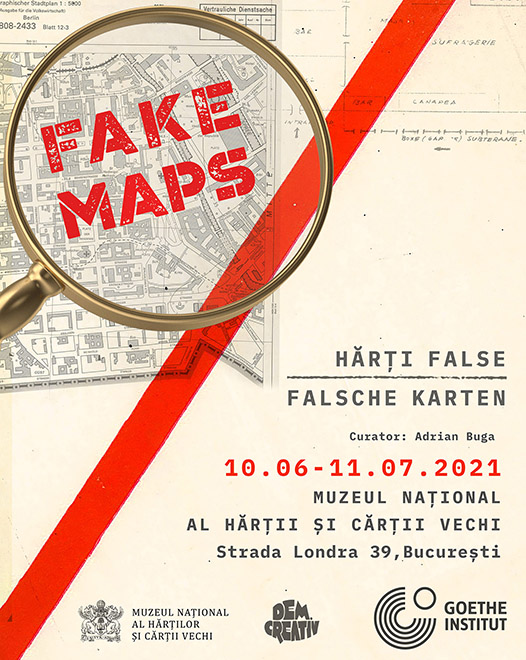 Starting 11th June 2021 the Maps Museum welcomes you to a new exhibition: Fake Maps. It was made in collaboration with Goethe Institut in Bucharest and Dem Creativ Association, and is curated by Adrian Buga, art historian.

You will have the chance to see fake maps and apartment plans made during the Cold War by the secret services in Eastern Germany (STASI) and Romania (Securitate).

Fake maps? It is a paradox! A tool meant to give accurate and precise information is being falsified on purpose?…And yet, it is true. Maps of countries and cities were/are constantly forged. Map manipulation is almost as old as the history of cartography. The practice of making fake maps was highly used during the Cold War when, on both sides of the Iron Curtain, maps were falsified for reasons of national security, politics, propaganda. Streets and buildings were erased from the map, streets had fake names and dead ends were shown as streets… While the civilians could only use forged maps, topographic and real maps were not available for them.

Apartment plans of the ”the enemies of the people” elaborated by Securitate (Romanian secret service) in order to observe and even eliminate people whom were not embracing the communist system, maps for illegal border crossing made by hand, fragments from the movies The Life of Others (Germany, 2006) and Cold Waves (Romania, 2015) – these and many more will be featured in the exhibition.

ICHC – 29th International Conference on the History of Cartography